A wee bit of info to help you in your journey to discover your Scottish Ancestors and maybe even crack a brick wall or two!

Scotland Now has negotiated with ScotlandsPeople to give away 20 free credits. These are for new and existing customers alike.

Here is the link to the article:

with thanks to Judy Webster & Chris Paton for the Twitter Tip!
Posted by Christine Woodcock at 12:31 No comments:

Last night, I received this email from Heidi Walker:


Regretfully, we must cancel the National Genealogy Conference in Canada for July 17-19, 2015.

Many thanks to the planned speakers for their willingness to support an inaugural national genealogy conference in Canada, to the companies and organizations who were willing to support the conference through sponsorship, and to those who generously helped to spread the word to their network of genealogists.

I must say I am not surprised. The conference wasn't well thought out. It was scheduled just 6 weeks after the Ontario Genealogical Society's Conference, the largest in Canada. It was scheduled to take place in Halifax with the hopes that an optional tour of Pier 21 would be the draw. There were very few workshops and the few that were on offer were repeated, making even less choice over the time of the conference. There was no opportunity to attend as a day delegate, so anyone living in the Maritimes was essentially weeded out.

The fees were initially astronomical at a whopping $895 per person. PER PERSON! This did not include airfare, hotel or a number of meals. Some basic research would have shown the organizers that the people who attend genealogy conferences are either individuals or they are not-for-profit agencies who send delegates, with the cost a major factor in the decision to attend. The fees were more in keeping with a trade show than a genealogy conference.

Certainly the fees were significantly reduced late in the game. By 75%. That large of a discount tells a story in and of itself. And the new rate wound up being the same as the vendor fees required for an exhibit in the marketplace.

Hopefully at some point a national genealogical conference will be possible in Canada. But it needs to start with planning. And that includes a feasibilty study that would look at demographics of attendees, partnerships with local agencies and a more aggressive marketing scheme.

Posted by Christine Woodcock at 09:46 No comments:

Why is it that once people get onto social media, they lose their manners? Do they really think etiquette doesn't matter if its not a direct contact situation? Well, lemme tell ya, manners matter. Even in the world of blogging.

I have, in the past couple of weeks, been morbidly fascinated with a couple of bloggers and their total lack of manners. When you get an idea from another person - through a blog, a tweet, an email or from a Facebook post, say "thank you" And the way you do that is to give a virtual "nod" to the place where you learned the information.

I'm not talking about the new records releases. Most of us who blog are signed up for more electronic newsletters or email alerts than we can count. The same email goes to dozens of us at the same time. I am always aware of a new record release because the topic takes up my newsfeed - either on Facebook or on Twitter. I may or may not jump on the bandwagon depending on the record set and its interest to my target audience.

The same thing goes with announcements like Calls for Papers, Conference Updates or Registrations.

I'm not even talking about opinion posts - the kind that pop up after an episode of WDYTYA? or during/following a conference, webinar etc. I love reading the various experiences and points of view.

I'm talking about the topics less talked about. The more exclusive events or lesser known pieces of information. Events I may get invited to because of my connections to the Scottish community or the Scottish Canadian community.

I have really been morbidly fascinated by some of the blogs that have shared information on the same topic as if the author was in attendance with me.

Take Chris Paton (http://britishgenes.blogspot.ca/) for instance. Chris is a prolific blogger. And tweeter (is that even a word?). But he ALWAYS gives a nod to where he learned of the information. He may do that by stating he had a meet up with the person, or by sharing pieces of an email, or a link to a blog post, He is a true gentleman in the world of social media and one that new bloggers might want to turn to when unsure about how to share information you learned about through someone else's post. Equally well mannered is blogger John D Reid (http://anglo-celtic-connections.blogspot.ca/) Another gentleman who knows his manners when it comes to sharing information.

As I've said before, everything I need to know about genealogy I learned in Kindergarten (http://scottishgenealogytipsntricks.blogspot.ca/2015/02/everything-i-need-to-know-to-be.html). Things like sharing. Sharing is good. But when you share, it's really important to remember your manners.

If you have an apple in your lunch bag and half the class has an apple, its ok for you to tell the world about your apple. Why it was different than the other apples, why you love apples, why you wish your mom would figure out a different dessert. Share away. But if you have an apple and I have a butter tart, you best not be telling everyone how delicious a butter tart is in the middle of the day. It really is as simple and uncomplicated as that.

Posted by Christine Woodcock at 09:20 2 comments:

One of the best genealogy events around is the annual Genealogy Fair, hosted by the Kitchener Public Library. Even better is the fact that, in keeping with the library's policy of free access for everyone, the Genealogy Fair is also FREE.

Talks, workshops, marketplace and like-minded people. What a great way to spend a Saturday.

Join us April 25th at the Central Library for a day of learning and networking. 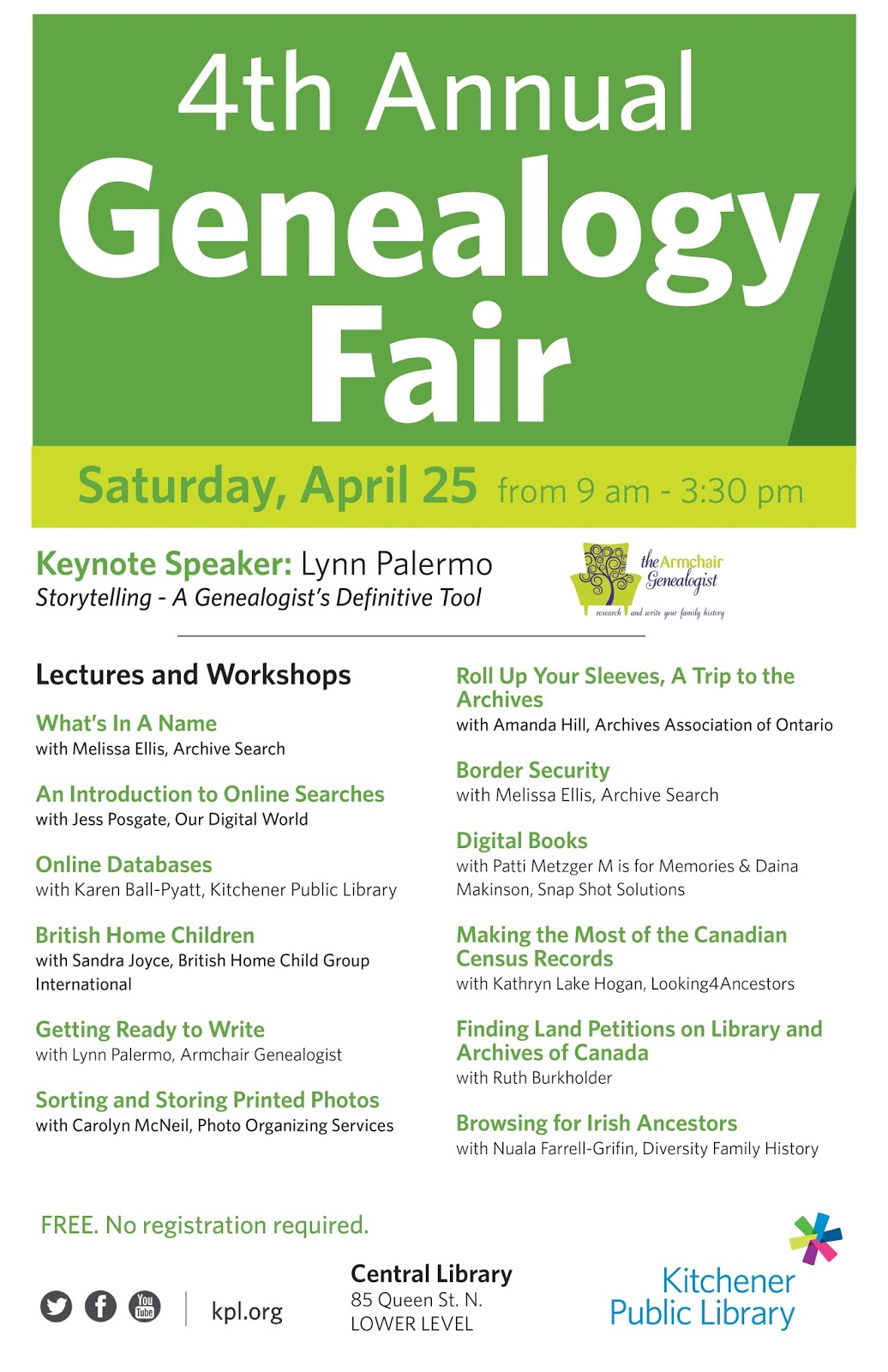 Posted by Christine Woodcock at 09:26 No comments:

Promote Your Page Too